Shortly after mining operations began in 2008, water quality monitoring data began to show problems at the Buckhorn Mine. The issues began when the mine used contaminated development rock to construct the mine facilities, instead of putting it on liners as required. Early on, the treatment facility was inadequate and discharges from the underground mine, the mine surface, and from the treatment facility began degrading the water. Water quality violations have been almost continuous since then.

The Department of Ecology (Ecology) issued the first penalty for a water quality violation to the operator, Crown Resources (a wholly owned subsidiary of Kinross Gold Corporation) in April 2009, along with numerous corrective action requirements. The next penalty was issued in November 2010 for purposefully causing compliance water quality samples to be unrepresentative of the more polluted mine water. Unfortunately the water quality problems persisted and got worse, but staff changes at Ecology compounded these challenges during the time it takes for new personnel to become oriented. The next penalty was not issued until July 2012, and no penalty has been issued since, despite nearly continuous water quality violations.

The 2012 penalty was appealed by Crown but subsequently settled with Ecology. Next, the renewal of the mine’s discharge permit was appealed. Crown’s appeal was rejected by the Pollution Control Hearings Board and Ferry County Superior Court and awaits a decision by the Washington State Court of Appeals. In the meantime, the mine has ceased operations, and reclaimed the surface. Ecology has issued Notices of Violations each quarter for the past five quarters, but has taken no enforcement action. Ecology has approved a closure plan that lacks specific details that are needed to protect water quality.

Some compliance monitoring locations have seen decreased concentrations of mine contaminants recently. However, nearly all locations with water quality poor enough to exceed permit limits in the past still continue to violate the permit – even with the mitigation measures put in place by Crown. Water quality results for the key monitoring locations outside the capture zone are shown below. The degradation of water quality outside the capture zone shows that the mining company is not containing all mine-influenced water. The red dashed line in the above graph shows the allowable (2014 permit) level of sulfate. The other dashed lines show the general trend of sulfate levels in various monitoring locations.

These monitoring wells are located in a fault downgradient from the mine, just outside the capture zone, which is supposed to capture all mine contaminants. Sulfate concentrations in all these monitoring wells (MW) are still increasing. Many values in MW-14 and MW-2R even exceeded the State groundwater standard (250 mg/L — a much higher level than the 69.5 mg/L allowed by the permit). Although MW-14, which is closest to Gold Bowl Creek, had the highest peak concentrations, the recent overall trend in that well could be decreasing slightly.

Water Quality Not Improving at The Buckhorn Mine

Mine Seepage Exceeds Permit Limits; Violations Mount The 2018 Annual Coordination Meeting at the Buckhorn Mine included a presentation from Dr. Ann Maest, OHA’s consulting aqueous geochemist. Dr. Maest has worked on Buckhorn issues for 25 years and is an expert on the environmental impacts of mining, working on projects internationally. In contrast to the water quality presentation given by Crown Resources, Dr. Maest took a critical look at the previous year’s data. In her presentation, Dr. Maest concluded that, despite ongoing mitigation measures at the mine, water quality was not improving in key locations at the site. The presentation focused on the water quality impacts of two contaminants of concern: sulfate and nitrate. Read More… 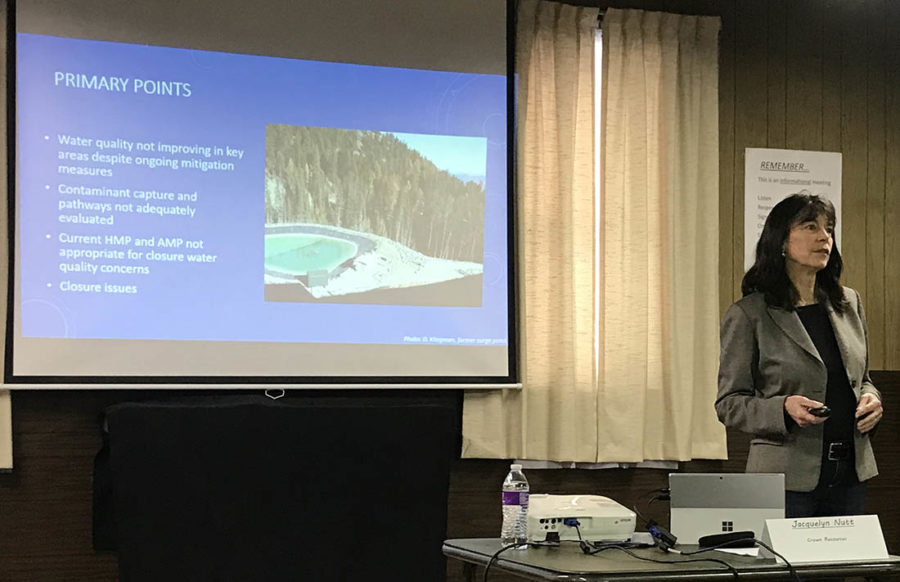 The discharge permit requires the mining company to make the water almost as clean as it was before mining. While the surface of the mine is beginning to heal, closure may take a long time. Water quality poses the greatest challenge in closing the mine. The Buckhorn Mine management plans are needed to provide oversight and remediation of the ongoing water quality issues.