On July 30, 2015, the Pollution Control Hearings Board (PCHB) denied Crown Resources/Kinross’ appeal of the NPDES (National Pollution Discharge Elimination System) permit, thereby affirming that the water surrounding the Buckhorn Mine must be left as clean as it was before the mine was developed. The Buckhorn Mine continues to discharge pollutants into the environment in violation of their waste discharge permit…

“The NPDES permit provides Kinross with the flexibility to mine while adhering to the requirements of the Clean Water Act,” states David Kliegman, Executive Director of the Okanogan Highlands Alliance. “Those requirements have not been met. Now it is time for the mining company to acknowledge that it is responsible for its pollution, and come together with all the interested parties to address the issues.”

History has shown that water quality issues arising during mining can last for generations. The PCHB concluded their review by saying, “The conditions in the Modified 2014 Permit requiring the capture and treatment of all Mine-contaminated waters are reasonable provisions that attempt to make certain that the Mine does not leave a legacy of water pollution.”

The NPDES permit was issued by the Washington State Department of Ecology on February 27, 2014, after years of negotiation with Kinross. Kinross appealed the permit on February 28, 2014. The NPDES permit clarifies the farthest extent from the mine that contaminants are allowedto spread. It also confirms that the water quality standard (beyond this farthest extent) is the background level from before the mine was constructed.

Although the mine has pumped massive amounts of groundwater from Buckhorn Mountain in order to mine, this has not been sufficient to keep mine contaminants from escaping into nearby ground and surface water. “Kinross has been slow to acknowledge and adequately address its water quality problems,” says Kliegman. “The company needs to step up efforts to address the numerous violations that have built up since the penalty settlement in June 2013.”

Kinross is also out of compliance on several procedural requirements. Kinross was required to submit an approvable Adaptive Management Plan (AMP) based on the effectiveness of the last 5 years of monitoring data. The data show that the AMP has not been effective at preventing permit violations, yet the plan Kinross submitted failed to document the problems with the mine’s pollution control system, and it fails to provide adequate improvements to the system. The plan Kinross submitted was rejected by Ecology.

The Okanogan Highlands Alliance is a non-profit organization that works to educate the public about watershed issues, including the environmental threats of large-scale mining. 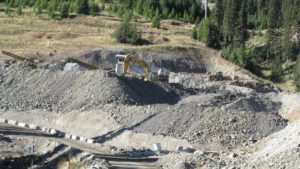 ears, the NPDES permit, which is required by the Clean Water Act to regulate discharges from industrial facilities, must be renewed. The Buckhorn Mine’s permit expired on November 30, 2012. The WA Department of Ecology temporarily extended the permit, due to complications stemming from the significant violations that were issued in July 2012, which Kinross appealed. Violations of the NPDES can bring penalties of up to $10,000 per violation per day.